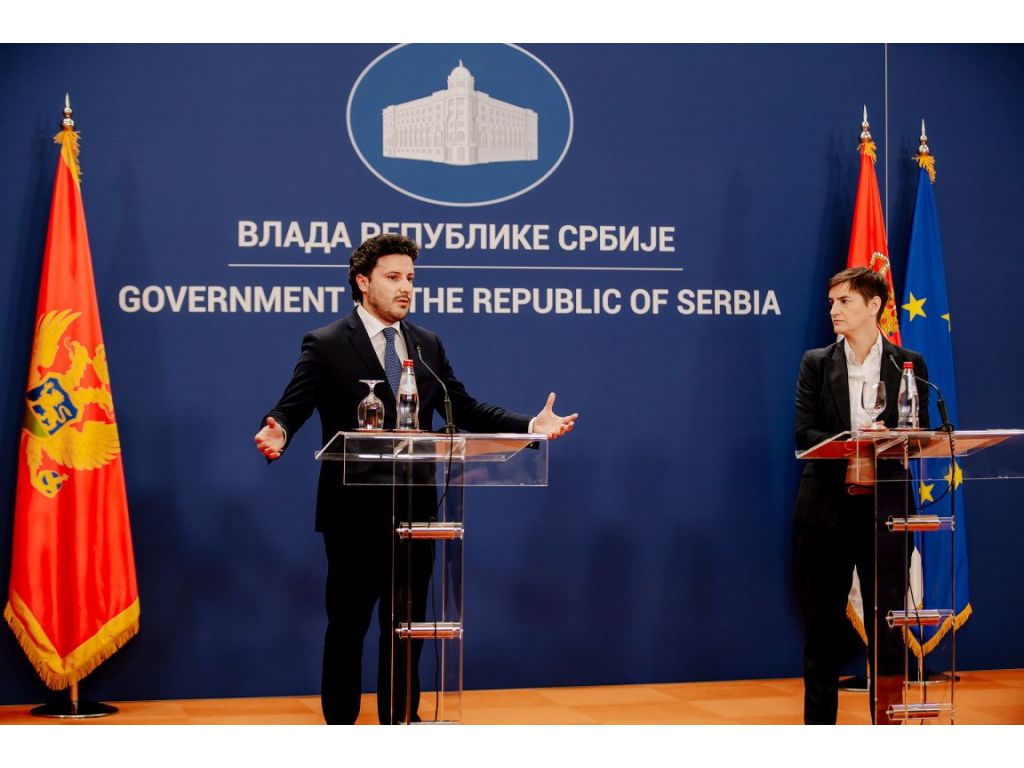 Dritan Abazovic and Ana Brnabic (Photo: Vlada Crne Gore)
At the meeting of the prime minister of Serbia, Ana Brnabic, and her colleague from Montenegro, Dritan Abazovic, the predominant topic was economy, and one of the important questions that could soon be solved is the establishment of payment transactions between the two countries. Also, special focus was placed on infrastructural connecting, but also joint energy projects, which have great potential.

Ana Brnabic said that, as long as Serbia had enough food, so would its friends in the region.

– As for food, we have always been perfectly clear and I want to repeat that message today. While we have food, so will our partners in the region. Serbia has enough food for itself. It is an exporter, especially of the basic foodstuffs such as oil, wheat, flour, and there will be no problems there. We will always take care for all our friends in the region to have enough food – said the prime minister of Serbia.

– We have received assurance that food deliveries, which Montenegro needs, because, unlike Serbia, we are an importer of food, will happen without any restrictions, which is a mitigating circumstance. We all want to believe that the war in the territory of Europe will end and that there will be no crisis, or at least that it will not happen on a great scale, but the responsible approach of both governments is to be ready for a scenario that is not so good. That means that we do have to have certain quantities of food, but also of energy sources, which will be able to meet the citizens’ needs, if there are certain considerable disturbances in the autumn or ahead of the winter – Abazovic said.

In addition to food stock, topics of special importance for both countries were discussed at the meeting. One of them is the issue of payment transactions, which haven’t existed between Serbia and Montenegro for 14 years now.

– We want to establish payment transactions between Montenegro and Serbia. There is no logic for it to not function for over a decade and for it to happen through third parties, international banks, which means bigger costs and operating complications. I believe that we should try to facilitate things for the citizens and the economy wherever we can, for it to be a widely accepted principle – Abazovic said.

Infrastructural connecting of the two countries was also discussed at the meeting, and Abazovic and Brnabic pointed to the importance of the completion of the highway, but also the reconstruction of the Belgrade-Bar railway.

– The aim is for the part of the highway that we are supposed to open on July 13 to get its extension, which should go toward Belgrade and Budapest. At the same time, when we’re talking about the modernization of railway, a strategically important thing is to create corridors in order to be able to use our potentials in the best way possible. We have some ideas concerning the Port of Bar, which we have discussed intensively with the minister of finance, to bring it back to a 100% state ownership. That doesn’t mean that we don’t want to increase the port’s assets, quite the contrary. However, how can a port increase its assets in the first place if its roads in the hinterland, whether it’s the highway, regional roads or railways, are in the condition in which they are now? – said Abazovic.

Brnabic said that Serbia had already started planning and building the part of the highway from Pozega to Boljare, that is, the border with Montenegro.

– According to the entire project-technical documentation, it will be one of the most expensive highway sections of all those we are building or have already built in Serbia. However, we truly intend to finish it as soon as possible and to establish a full infrastructural connection with Montenegro. We also aim to reconstruct the railway that goes to the Port of Bar, which has a strategically important function and role for us in Serbia, not to mention Montenegro – Brnabic said.

Another important question discussed at the meeting was energy, and according to Brnabic, there’s enormous potential there for cooperation in the future.

– There are perhaps no things that we can solve in a short amount of time, but there are projects which we can work on together, in order to secure our energy independence and stability. We can do a lot in regional projects between Bosnia and Herzegovina, Montenegro and Serbia. There are considerable hydro potentials and if we agree to use them together, while obliging for everything to be harmonized with the best international standards of environmental protection, we could get considerable additional energy capacities – Brnabic said.

When asked about the construction of the HPP Buk-Bijela, she added that the construction of the Hydro Power Plant (HPP) Buk-Bijela was just one of the potential projects and “a drop in the sea” of everything that could be done together. According to her, energy is the question number one and everything the two countries can build together to get additional energy is invaluable.

– Political disputes must not stand in the way of that – Brnabic said and pointed out that the region needed additional electrical energy that would be produced there and shared between the countries.

– The sooner we reach an agreement, the sooner we will ensure energy security, but also more competitive energy prices for the citizens and the economy – Brnabic said.

She also mentioned the idea which was first initiated during the Open Balkans summit, namely, the establishment of a joint energy policy.

– We would thereby make the region safer, more sustainable and better for local and foreign investors – she said.

The prime minister of Montenegro, Dritan Abazovic, said that he agreed with Brnabic regarding the energy crisis and a balanced system.

– Montenegro is heading in the direction of building new energy facilities, but for us the priority is solar and wind energy. At the moment, we are not part of the natural gas network, and we want to be and we are heading in the direction of connecting. We believe that the Port of Bar is an ideal place to extend the southern part of the gas pipeline which has reached Albania – Abazovic said.

Although, as he said, the energy crisis was acute, all analyses pointed to the fact that the shortage of energy would be continuous.

– We are all thinking the same way, to build new energy facilities and thereby reduce the potential shocks that could occur – Abazovic concluded.

In 2021, Montenegro and Serbia had a goods exchange worth EUR 900 million, Ana Brnabic announced.

– In the period between January and April 2022 alone, we reached EUR 307 million, which is 29% more compared to the same period last year. I expect the goods exchange to exceed EUR 1 billion this year, which is excellent. When we solve this issue of payment transactions, I believe that the number will be much, much higher – Brnabic said.