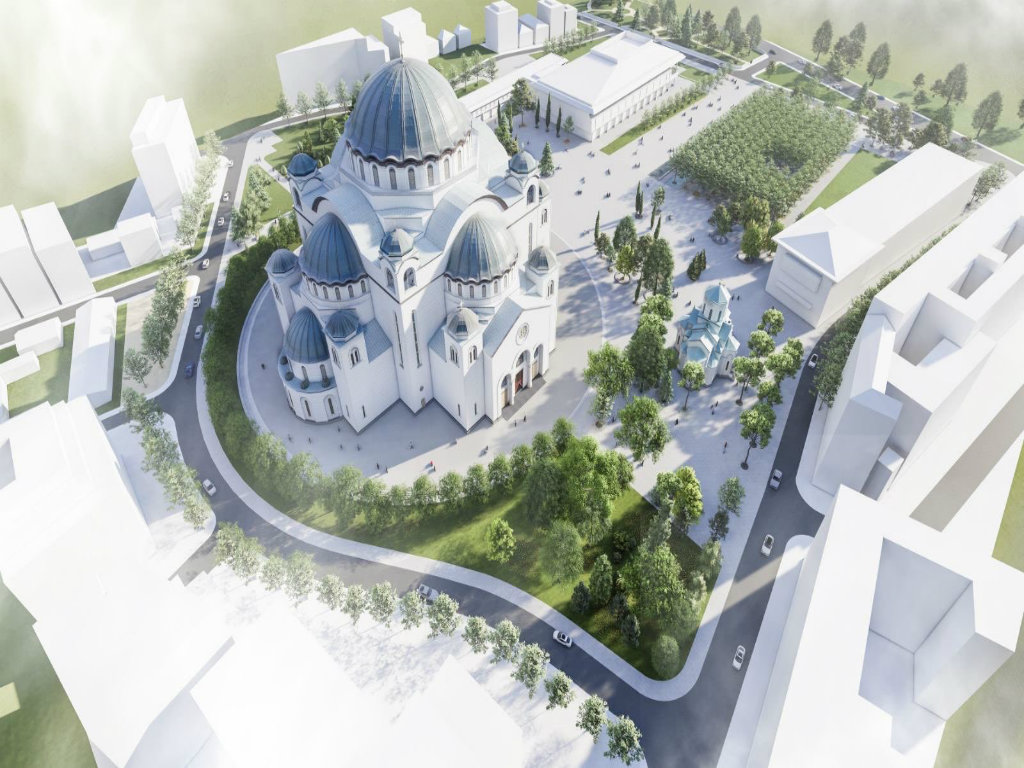 (Photo: Grad Beograd)
The reconstruction of the plaza in front of the Church of Saint Sava began today, and the works, according to the authorities' announcements, should be completed in 2021.

– The first phase of the reconstruction of the plaza is currently in progress and it entails the paving of around 8,000 m2 of the church's portal area with the highest-quality marble. We expect the first phase to be over by the end of this year, that is, in three months. After that, next year, we will begin the second phase, which will entail the reconstruction of the plaza from Oslobodjenja Blvd, where the potential of this development of the park and the plaza will become apparent. That part will consist of a great forested area, which will be a counterpoint to the National Library building, and a spatial corridor in the central part, which will enable the passers-by to see the Church of Saint Sava in all its glory from the boulevard. It is only then that the arrangement which was initially conceived will become fully apparent, meaning that the most important Serbian church will be fully visible – the head urban planner of Belgrade, Marko Stojcic, said, as reported by Beoinfo.

One of the contractors is the PUE Zelenilo-Beograd, and Stojcic thanked the architects-professors, Branislav Mitrovic and Dejan Miljkovic, who prepared the preliminary design and the project documentation.

– This is a very good architectural project, which will fully change the area and the spatial sight lines. We have managed to introduce a large number of trees, a spacious plaza for the churchgoers, the events to be held here and a section for pedestrians – Stojcic said.

Let us remind that it was announced earlier that the reconstruction of the park in front of the Church of Saint Sava would cost EUR 7.5 million, and more details about what it will look like can be found in a separate article.
Companies:
Grad Beograd
JKP Zelenilo Beograd
Tags:
City of Belgrade
PUE Zelenilo Beograd
Marko Stojčić
Branislav Mitrović
Dejan Miljković
Church of Saint Sava
park development
park reconstruction
park in front of a church
Share: